Most of us have experienced musical fragments that seem to get stuck in our minds, looping endlessly for hours, even days. Julie Reid takes a closer look at what’s going on.

Despite not really listening to the song during the past 10 years, I found myself singing the lyrics under my breath throughout the days that followed. I woke up with the tune playing in my head. I just couldn’t shake the upbeat tempo, the clever lines and the satisfaction of a girl gaining the upper hand in the aftermath of a bad relationship.

And yet – days later – I find the repeating fragment less satisfying and more irritating. What’s going on?

Dr. Oliver Sacks devotes an entire chapter of his book Musicophilia to these fragments that get stuck playing on a loop in our brains. They are often referred to as earworms from the German word Ohrwurm, but Dr. Sacks also calls them brainworms.

He shares the story of a friend of his who would get ‘Love and Marriage’ by Frank Sinatra stuck in his mind for up to 10 days at a time. ‘With incessant repetition, it soon lost its charm, its lilt, its musicality and its meaning. It interfered with his schoolwork, his thinking, his peace of mind, his sleep.’

Why do some songs get stuck in your head?

It’s extremely likely that you can relate to these situations. According to James Kellaris from the University of Cincinnati, almost 99% of people have experienced musical fragments that get stuck in their heads.

It makes sense in one way. The music industry purposefully designs tunes to capture our attention and create auditory memories – not just of the song itself but of the context in which we heard it.

From advertising jingles to the latest pop songs, the more recognisable and ‘sticky' a piece of music is, the more likely it is that we’ll keep coming back for more.

Most of the time that can be win-win. We enjoy the emotional payoff to the repetition and familiarity of the music and the industry reaps the benefits in terms of increased revenue from album sales or whatever it is the advert is selling.

It’s only when something triggers this auditory memory and the looping music doesn’t stop that we begin to experience the downsides.

So, what's happening in the brain?

Anyone who has had a repetitive musical experience will find themselves wondering about the cause of these brainworms – especially if it’s 2AM and you can’t go back to sleep for the music in your head.

Is there something specific about the timbre or rhythm or melody of a piece of music? Does it make a difference if there are lyrics or not? If the music triggers an emotional response or memory of an important event?

The part of our brain that engages with the sounds we encounter in real time is called the auditory cortex. And according to a study at Dartmouth College, that same region of the brain reactivates even when we imagine hearing the sounds.

People who took part in this study were hooked up to an MRI scanner and played songs that they were familiar with as well as songs they didn’t know. The researchers started playing the song and then pressed mute. But when the participants were familiar with the songs, their auditory cortex continued to fire even after the music was silenced.

It was as if ’the brain was connecting the dots,’ said Emily Cross, a graduate student who took part in the study. ‘You are not surprised when the song picks up, because you have been playing it all along in your head.’

That leads to one theory behind why certain songs get stuck in our heads. If we hear fragments of a musical piece, we’re familiar with, but not the full song, our brains may end up in a loop trying to finish the song.

But there are other theories too.

It may be that the act of trying to suppress the musical fragment once we’re aware of it can make it worse. Like trying to resist thoughts or emotions during a meditation session; the act of resistance somehow magnifies the experience.

Or perhaps it’s simply 'a way to keep the brain busy when it’s idling'.

Can you get rid of these fragments?

While neuroscientists continue to research the cause and potential solutions to these brainworms, here are a few ways to replace – if not silence – your musical itch. 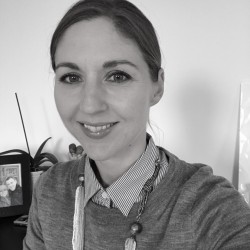 Julie Reid is an American expat and writer living in England. Her writing explores how people tell stories and celebrates the small moments in everyday life. She loves to walk in the countryside with her black lab, bake desserts and listen to her collection of old records. She always has more than one book on the go.

7 articles
More from the collection